So…this is very late, if you saw the instragram post go up, it is certainly not the same-day post I promised. So I guess my first self-advocacy fail is this – you have to actually self-advocate.

There’s a lot floating around on the Internet about the importance of self-advocacy, and I see a lot about what that can look like, but not so much about what to do when everything goes wrong.

Here is a Q&A about some of my own self-advocacy fails, and what I learned from them.

What is your biggest regret?

My biggest regret is not standing up for myself for fear of being labelled a “problem patient”. I always knew that as a patient, I had a right to have a say in my care, but when the time came to speak up because I was being mistreated, I stayed silent for too long and, although it was not my fault, needlessly prolonged my suffering.

I’ve spoken before about the trauma of my 2018 hospitalisation for gastroparesis. I was being sidelined in decision making, being questioned by my doctors in a way that was inappropriate at best, and malicious at worst, and having potential psychiatric review used as a weapon, rather than a treatment tool. New medications were being added, changed and toyed with with no indications of efficacy, and I was subjected to unnecessary tests which were invasive and painful in the name of ticking all the boxes.

I knew it was wrong but I felt victimised and silenced. It wasn’t until I had other people independently validate that what I was experiencing was not ok that I even had the confidence to trust my own perceptions.

Eventually, I did speak up. Quietly. Timidly. Ineffectually. But for the first time I told a doctor, out loud, that I did not agree with them and I wanted to try something different. It didn’t change the treatment plan, but it did get the abusive doctor off my team. I never had to see her again. Part of me will always regret the fact that if I spoke up the first time she acted inappropriately with me, she wouldn’t have been able to inflict so much damage. I’ve been in therapy for this trauma for many years now, and I know it wasn’t my fault, but it is still my biggest regret.

What I learned: sometimes, doctors are not going to hold to their ethical obligations. It is ok to speak out, doctors are not gods, they can be held accountable. Also, as much as self-advocacy is an important skill, it’s not perfect. Just because you can speak up for yourself, that doesn’t mean there aren’t still people who can support you. Find those people who will be there for you, give you courage and strength, support your autonomy, and also speak up if called on.

What is a common miscommunication?

I sometimes find it very hard to articulate the precise nature of my symptoms or experiences to specialists. The common things it’s easy, I know when I’ve dislocated something, I rock up to the physio, tell her, and she fixes it. Things that are more nebulous are much harder to describe, especially with telehealth when you can’t necessarily see the doctor’s face to make sure you’re in the same page.

A recent example of this is last year, when I was trying to ask my cardiologist to trial a new medication for my POTS. I was trying to say that, unlike normally, my general dysautonomic symptoms were stable, but for once it was heart rate alone that was giving me trouble. I tried to give as much detail as possible, but that resulted in me talking myself in circles, and the cardiologist thinking I had the opposite problem (stable HR and worse syncope & BP). Because of this, he didn’t want to change medications, because the med was for HR exclusively. Once I clarified the confusion, he was quick to listen to my reasoning and draw up a plan, but the miscommunication wasted valuable appointment time.

What I learned: Go in to each appointment with a plan. This can be as simple as “at this appointment, I want to talk about x, y and z”, or a detailed written plan of everything you need to say, the questions you want to ask, and answers to potential questions the doctor might ask you.

I’m in the middle of applying to the NDIS, the Australian government-funded disability support service. To do this, I need a number of reports from my treating professionals in support of my application.

My first relevant self-advocacy success was writing a letter to my cardiologist requesting a report. I did this because I wanted to be able to set out clear instructions for what needed to be included, and the type of language which should be used (the NDIS prefers plain English, and is about functional impairment over diagnosis).

My occupational therapist is very kindly reviewing all of my reports before they are submitted to make sure the structure, language and content is consistent with that preferred but the system. She flagged an issue in my cardiologist’s report, and asked me to contact him to see if he would be willing to change it. I sent off an email to his secretary forwarding on my concerns, and my doctor actually called me to discussed it that same afternoon.

This is where the second success comes in. He, for a legitimate, if unhelpful reason, did not want to change the wording of his report to that proposed by my OT (medical and disability-based approaches sometimes differ in their perspectives). However, I proposed a compromise of simply removing the problematic phrase. He was comfortable agreeing as this would not change the meaning of the report, but would still close a potential loophole for baseless questions from the NDIS.

What I learned: Compromise is key. One thing I have learned working as a lawyer is to work out what is the bare minimum that works for you, and never start there. Always first propose what would happen in a perfect world or best possible scenario, so that you have room to negotiate to a compromise that still meets your needs.

I hope that some of this has been helpful, it’s actually been a joy to (finally) write this post, and look back to see how far I’ve come in just a few years. 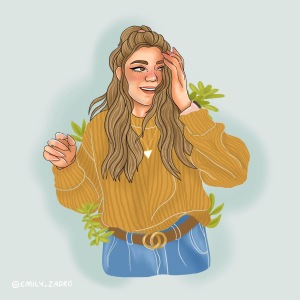 Hi! I’m Lucy. I’m a chronic illness blogger trying to share my story, hoping that I can pass on some tips and tricks along the way.